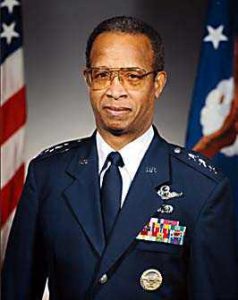 Adrian Felts, the 2016 Chairman of the Chamber’s Board of Directors had this to say about the engagement, “Our Chamber is honored to have Lieutenant General Russell Davis as our Keynote Speaker for our second Chamber Veterans – Defense Honor Luncheon. Lieutenant General Davis’ dedicated service to our nation and his dedication to education, law, and government make him an exceptional speaker for our luncheon to honor and thank those that have served our country, are currently serving, and who work in the defense firms and agencies in our community.”

After the luncheon, Mr. Thomas also contributed with, “As a long-standing member of the Chamber, and as a business consultancy in the government space, I am happy to see for the second year the recognition of someone who represents what our Veterans stand for: sacrifice, diligence, and commitment. We at SHINE are happy to have been a part of this event and look forward to more like it in the future.”

Lieutenant General Russell Davis was born and raised in historic Tuskegee, Alabama, graduating from Tuskegee Institute High School. Along the way he became an Air Force pilot; graduating from the University of Nebraska in 1963. Since 1960, the General has flown almost every Air Force craft with wings. He has served as a Bomber Command Pilot and commander in numerous posts including at Langley and the Pentagon.

When not in command or in the air, General Davis graduated from the National Air Command College – and also gained his Juris Doctor law degree from Drake University School of Law.

In 1998, President Bill Clinton appointed the General, National Chief of Staff for all National Guard operations in the United States. The General, and attorney, continues to practice law; consults on national and homeland security, IT, aviation, insurance, diversity, and aerospace. He serves on several corporate Boards and the Boards of Trustees of the Drake University School of Law and Boy Scouts of America.

General Russell Davis always remembers his heritage and his home. He has served and continues to serve on the Board of Trustees and as a former president of the Tuskegee Airmen Foundation.

David Kirk, SHINE Web Developer and Veteran, was also recognized by DIA for superlative performance and was lauded by Mr. Thomas at the luncheon as well as presented with his Letter of Recognition. 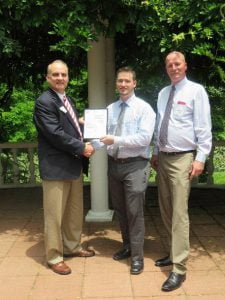 ABOUT THE CHARLOTTESVILLE REGIONAL CHAMBER OF COMMERCE

The Charlottesville Regional Chamber of Commerce is dedicated to representing private enterprise, promoting business, and enhancing the quality of life in our Greater-Charlottesville communities. Founded in 1913, today our Chamber’s more than 1,200 Chamber member and affiliate member enterprises employ more than 45,000 people in our community, generating a total payroll of more than $1.75 billion each year.

SHINE Systems & Technologies (SHINE) is an SBA-certified HUBZone small business headquartered in Charlottesville, Virginia. SHINE Systems is at the forefront of innovation in our core competencies of Decision Analytics including Military, Identity, and Business Intelligence; Technology Integration; and Mission Support Services. We develop value-driven solutions for our clients across federal, state, and local government as well as the commercial sector using our industry knowledge, service and product expertise, and ground-breaking technical capabilities. For three years running, SHINE Systems has been recognized on the Inc. 500|5000 list of fastest growing private businesses as well as #3 on the Washington Technology Fast 50 fastest growing small businesses in the government market. To learn more, please visit www.shinesystech.com.